The Stellar Beacon is a zine that supports the sci-fi RPG Return to the Stars with new adventures and which also explores the gamer and geek culture more broadly.  This issue includes:

Fanfiction: The Infinite Free Buffet 2019 Hugo nominee Alexandra Rowland celebrates fanfiction, explores its significance, and defends  it against those who shallowly dismiss it.

In fact, it's always been cool, but now people get to say so out loud. Archive of Our Own, the fan-run, -coded, and -owned fanfiction site (which recently broke a landmark four million works hosted) is nominated for a Hugo Award in this year's Best Related Work category. Not only that, more and more professional authors are talking in public about how they used to write fanfic, or they still sometimes write fanfic, or they're writing fanfic right now as we speak."

The Undying Elite A scenario for Return to the Stars that examines what the corrupt are willing to do hold on to power, and the price others are willing to pay to resist.

“Conspiracy theorists propose that Jackson utilized psychotropic drugs and subliminal signals to rally his group of fanatically loyal followers and take control of the colony, but that’s just an excuse to justify the way people blindly accepted Jackson’s steady dismantling of the safeguards and protocols that would prevent a single individual from ruling in perpetuity.”

Richard Bellingham is the author of the RPG The Secret of Cats, and creative director of The Fate Horror Toolkit.

Yes, And… Gaming! Learn how techniques from theatre can help players and gamemasters enjoy a more constructive, team-orientated form of roleplaying.

“When players treat your RPG as a theatrical endeavor, it can become so much more than playing a game – it becomes a living story. Encourage your players to make decisions from a place of character motivation, not in terms of the best way to beat the system and win.”

Melissa Carubia is a music director, composer, and actor making art and music in the Boston area. Melissa  teaches improv and has written several musicals including the critically acclaimed “T: An MBTA Musical” which premiered at ImprovBoston and later was performed at the American Repertory Theater’s OBERON.

Framing the Future: the uses of Optimism Optimism is having a moment, But, beyond escapism, what can optimistic speculative fiction accomplish? Mark Sabalauskas, designer of Return to the Stars, delves into one of the game’s core themes.

“Utopias use ambitious world building to get to the root of some truth about society. They imagine a better world to explore what could be fundamentally different about our own. Utopias, then, differ in tone but have a similar purpose to serious dystopian works like The Handmaid’s Tale. Utopian and dystopian traditions, at their best, are partners tidally locked – circling, facing, and influencing each other.”

A collection of entertainment themed sci-fi sandbox story prompts for Return to the Stars!

“Throngs of screaming fans follow teen heartthrob Canna Vax, but only those who have her name encoded into their mitochondrial RNA can attend her concerts.”

In order to download this zine you must purchase it at or above the minimum price of $3.99 USD. You will get access to the following files: 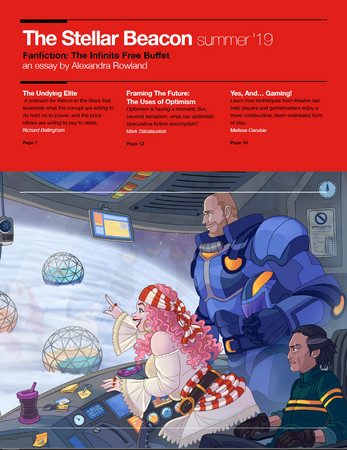 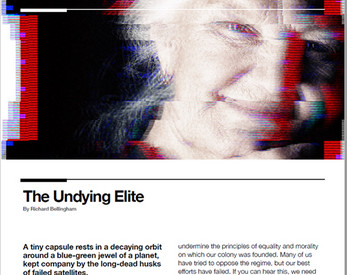 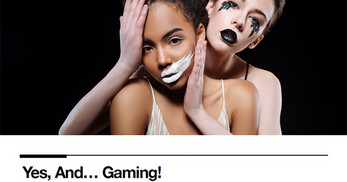